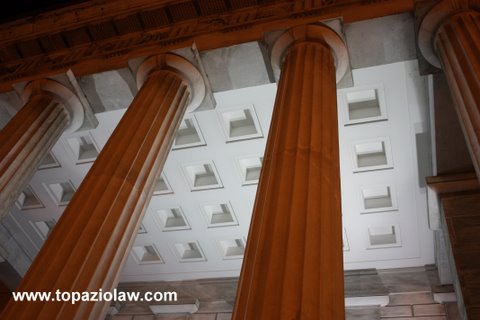 Virtually every day, people are served with subpoenas to appear before a grand jury — and most have no grasp of what grand jury proceedings involve. On a basic level, if you have been called to testify, it means a prosecutor believes you have information that will support someone’s indictment on serious criminal charges.

At the Law Office of Attorney Steven J. Topazio, we have extensive experience in both the state and federal court systems. We can fully explain your rights and obligations before you testify – in the effort to provide maximum protection of your interests. Contact us online to arrange a consultation or call .

Understanding Your Legal Rights, Your Obligations and Any Risks

Your specific grand jury subpoena might be for proceedings associated with a federal or Massachusetts state investigation — involving allegations ranging from drug trafficking to business fraud. Whether or not you believe you have anything to hide, or that the prosecutor’s investigation in pursuit of an indictment could ultimately impact you, it is important to understand your rights and risks.
Once we understand your circumstances, we can advise you on issues such as:

We Respect Your Concerns and Offer Knowledgeable Insight

We understand how disturbing and intimidating it may be to learn you are required to testify in grand jury proceedings. Our mission is to provide you with an experienced lawyer’s insight into your legal rights — and to be a valuable resource for you should you need further criminal defense counsel at any point. If you would like to discuss your concerns, please call our office or contact us online.

Your choice of a lawyer can have an impact on the rest of your life. Don’t take chances by waiting until it’s too late. To schedule a free consultation, call or contact us online.

The Client, an 18 year old High School Student, was arrested after he attempted to strike his ex-girlfriend’s ex-boyfriend with a motor vehicle, hired Boston Criminal Defense Lawyer Steven J. Topazio to defend him. According to the police report, the ex-boyfriend of the ex-girlfriend entered the Client’s home to beat the Client up after the ex-boyfriend discovered his girlfriend and the Client were dating. After assaulting and punching the client the ex-boyfriend was charged with home invasion. When the ex-boyfriend went outside, the Client attempted to run him over with his car. Attorney Topazio met with his Client and explained the Client’s Fifth Amendment Constitutional Right not to testify. After being requested to appear and testify before a grand jury, Attorney Topazio advised his client to refuse to appear or testify against his attackers. Attorney Topazio pointed out that due to the fact that the client was also charged with a crime and might incriminate himself if he testified before a grand jury, the Client could exert his right not to testify. Today as a result of the Client exercising his Fifth Amendment right not to testify at the grand jury, the Commonwealth was unable to get an indictment against the Client’s attackers. Additionally, with no witnesses available to testify in court at trial against the Client, Attorney Topazio was able to persuade the District Court to deny jurisdiction on the Assault and Battery with a Dangerous Weapon charge, in lieu of going to trial, but instead dismiss the case as a result of the Commonwealth’s inability to obtain any grand jury indictment. Assault and Battery with a Dangerous Weapon charge is a felony which has concurrent jurisdiction which could be tried in either the Superior Court or the District Court.
Result: Case Dismissed.